Here's a brief article explaining the stock Mazdaspeed/Eco Boost PCV setup, it's limitations, and how PERM's Dual Port PCV Plate may be used to improve upon it.

All cars generate pressure in their crankcase, it's the nature of the beast with piston engines, and the Mazdaspeeds are no different. A majority of this pressure results from combustion gasses pushing past the piston rings and entering the crankcase, hence the coined term "blow by". As the rings wear, and this seal degrades... the amount of blow by will increase. Blow by will also increase as the power output of motor increases... Increased power comes from increased cylinder pressure... which will naturally increase blow by.

In stock form, there are two ports on the engine that are used to mitigate this issue: one on the valve cover, and one on the short block (just under the intake manifold). And, since the Mazdaspeed/Eco Boost is a boosted car, there are two different situations in which these ports must operate: operation in vacuum & operation in boost.

While idling or operating at light loads (highway cruise), the stock setup uses vacuum from the intake manifold to pull pressure out of the crankcase. When this vacuum is sufficient, it will even result in fresh air flowing into the valve cover. It essentially maintains a constant "breeze" through the motor, using fresh air from the turbo inlet to push nasty vapors out into the intake manifold where they can be combusted and sent out the exhaust. Here's a diagram showing the flow while the motor operates in vacuum: 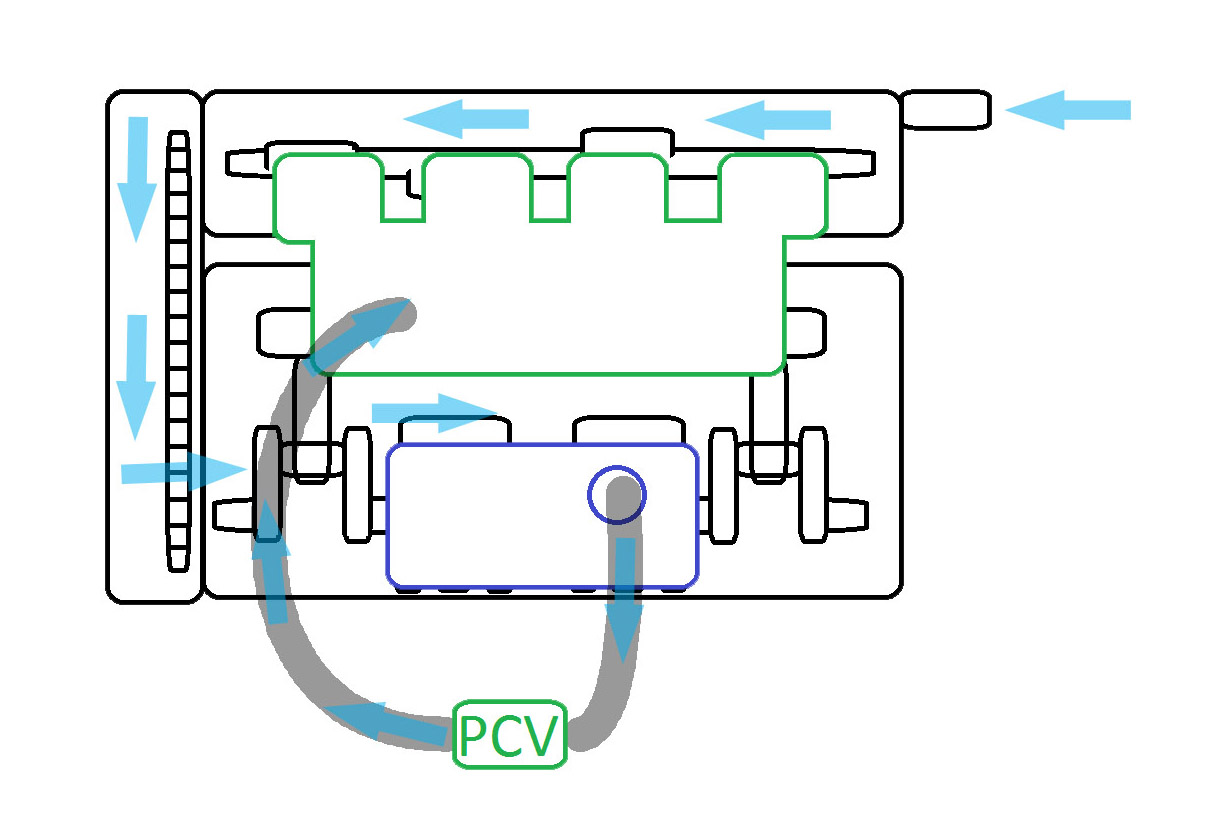 Because there is a constant flow of nasty oil vapor into the intake manifold, it's usually a good idea to install a sealed oil catch can in that path. By catching the oil in those vapors, it will help prevent nasty build up on the intake valves. Here's a diagram showing the flow with a sealed and vented OCC installed (note the necessary red check valve used to prevent boost from entering the catch can): 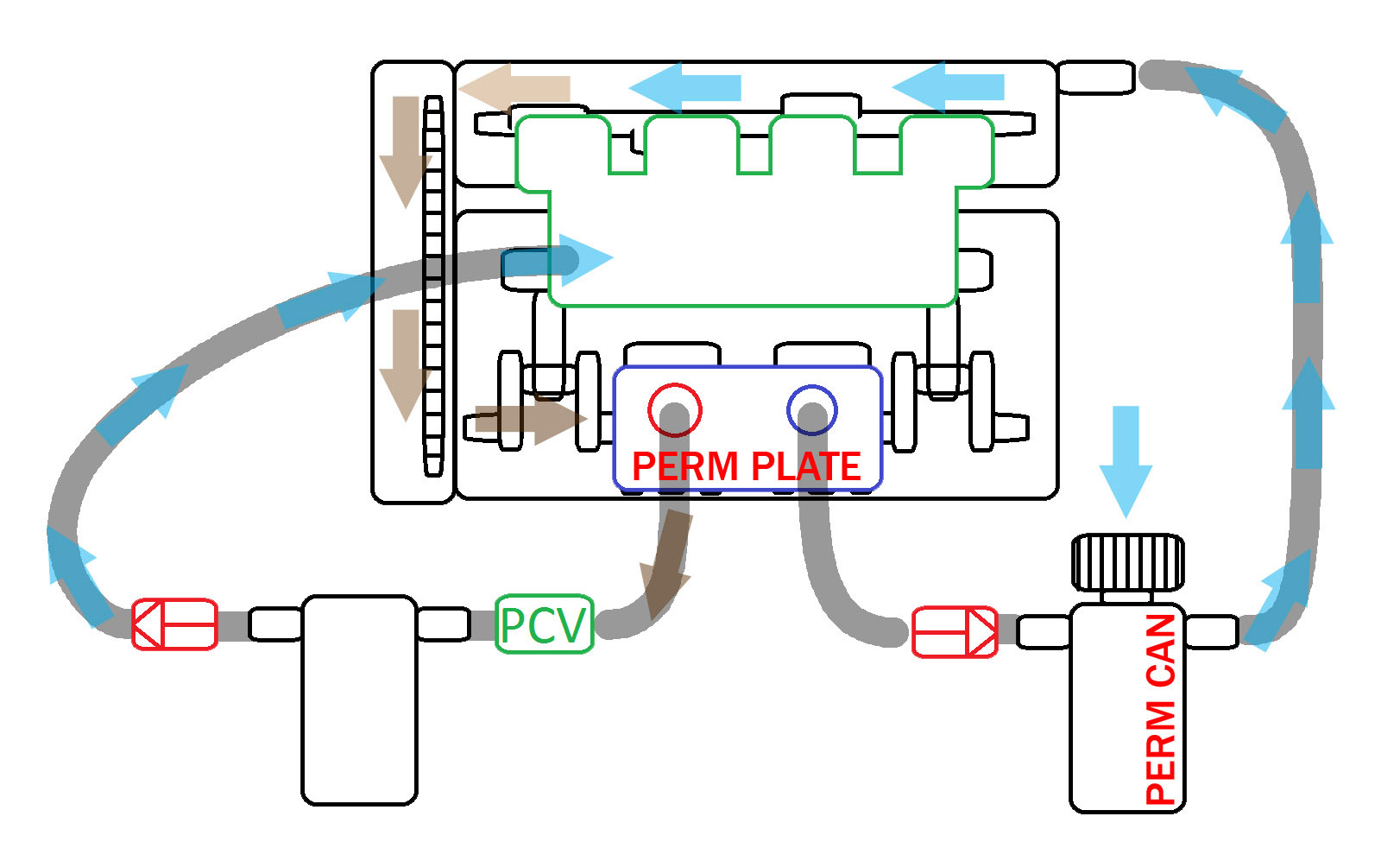 The PCV valve serves two purposes in the stock setup. When in vacuum (as in the above diagrams), the PCV valves job is to limit the flow into the intake manifold (think of it as a coffee straw). If it were not there, the intake manifold would essentially have a huge vacuum leak, and idle would be erradic. On top of that, the amount of vacuum seen by the crank case would likely be way too high... hurting oil control and potentially causing damage to the motor.

In boost, the PCV's job is to prevent boost pressure from entering the crank case. It behaves much like a check valve in this function, not allowing flow in the opposite direction. Herein lies one of the primary deficiencies of the stock system (especially at higher power levels): when in boost, not only does the crank case no longer have a source of vacuum to help purge the pressure... but it's also limited to a single port to vent out of. And unfortunately... that port is all the way on the opposite side of the motor from where the pressure is generated. As the pressure flow travels from the crank case, up through the timing cover, and out through the gamut of valve cover baffles... it picks up lots of oily vapors. The valve cover baffle network does a decent job at relatively low power levels, but as the blow by increases, they can become restrictive, and suffer reduced oil-control performance. This means residual oil vapor ends up going into the turbo inlet pipe, and eventually into the motor. These oil vapors aren't just "nasty" cause they're dirty looking, but oil vapors can also significantly reduce the effective octane of the fuel, increasing the potential for detonation. Here's a diagram of the stock pcv flow under boost:

From the above discussion, it's apparent the stock PCV setup is lacking in several areas. Under vacuum, it continually contaminates the intake manifold with oil vapors pulled from the crank case. As mentioned, this is best mitigated with the use of a high quality sealed catch can. In boost, not only is it still causing oil contamination (into the turbo inlet rather than the intake manifold), but its venting capacity is limited to a single port on the valve cover. Inadequate venting results in high crank case pressures that can not only affect oil control, but also rob power (increased pumping losses). At high enough power levels, crank case pressure has even been noted to push the dip stick out of it's tube, bathing the engine bay in a lovely coat of oil.

PERM offers two tools that can help alleviate these problems. The first, a Dual ported PCV Plate, is used to add a second port to the crank case cover, allowing venting directly at the source of the pressure when in boost. The second is a Vented Oil Catch Can, used to replace the turbo inlet pipe as a destination for the vented pressure. Rather than venting those oil vapors into the turbo inlet , it simply goes into an easily drained can.

On top of those perks, the PERM approach also allows you to maintain all the benefits of the stock system while in vacuum. Having the intake manifold apply vacuum, creating a "breeze" through the motor is actually a very good thing. The breeze helps minimize oil contamination by sucking out the nasty gunk and the vacuum helps promote healthy oil control. Here's a diagram showing the flow through a PERM setup while in vacuum:

Notice how the red check valves are installed. The one off the sealed catch can is setup as usual (per the sealed catch can's instructions) and it allows flow into the intake manifold while in vacuum. The second red check valve by the PERM can prevents flow into the PCV plate. This forces fresh air to flow in through the vented can and through the motor exactly like the stock setup, ensuring the constant "breeze" through the motor. If the valve cover was previously connected to the turbo inlet pipe, it's important to cap the inlet pipe off to avoid causing a huge vacuum leak on the intake.

In boost is where this setup really shines. In conjunction with the stock valve cover port, the crank case is now allowed to vent out the second port directly on the PCV Plate. This vent is right at the source of the pressure and doesn't require the long flow path back up through the motor. Here's a diagram showing the pressure flow while in boost: 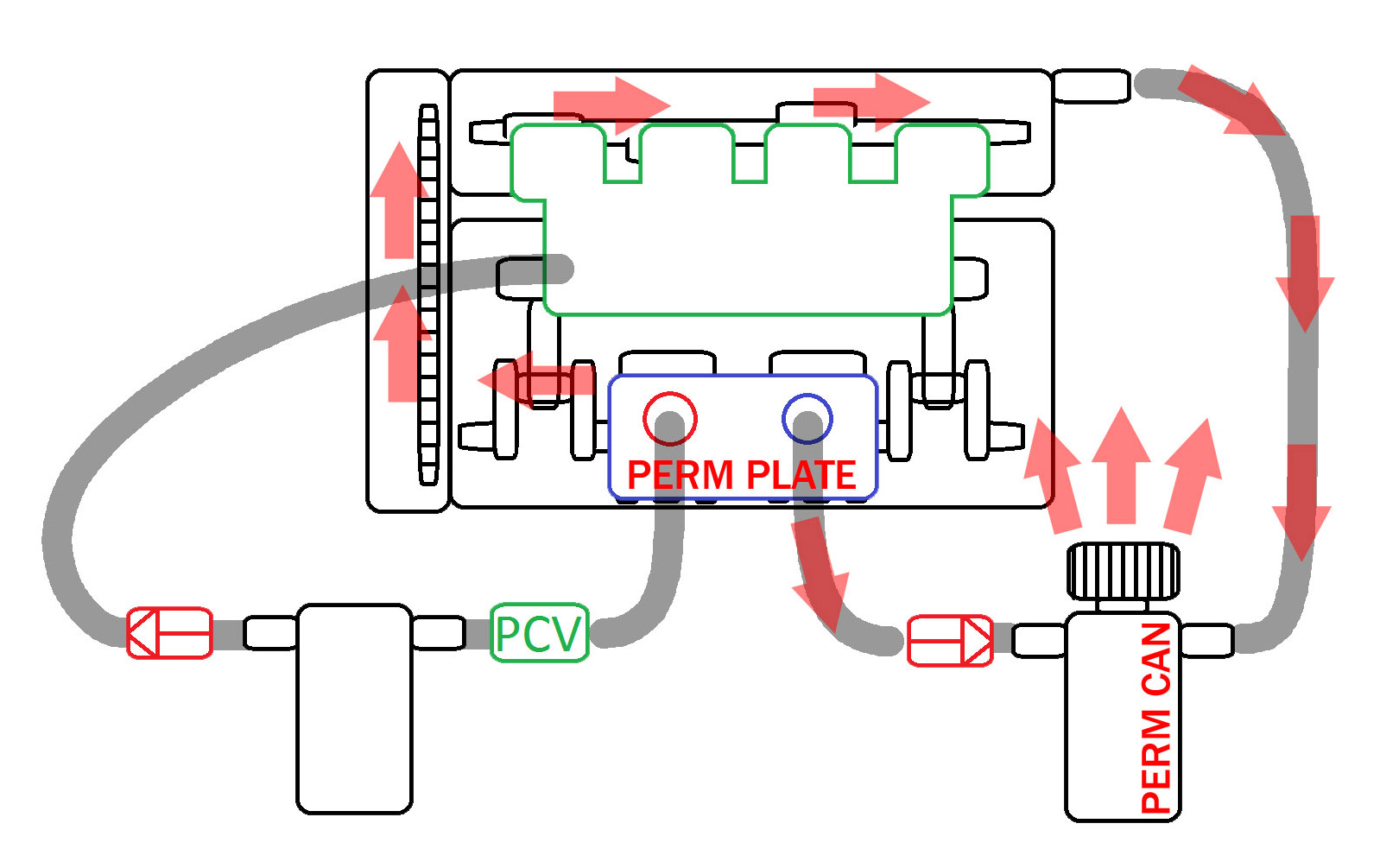 Again note the red check valves. The one next to the sealed catch can prevents boost from the intake manifold from entering the can or crank case. And the check valve attached to the PERM can opens up, allowing pressure from the crank case to vent out into the can. The stock valve cover vent still functions as normal, increasing the ability to evacuate pressure. As an added benefit, all of the oily vapors are vented through the can, rather than into your turbo inlet pipe. This ensures the motor is only ingesting nice fresh air from the intake.

Alternately, running just the plate without vented catch can would still give you the benefits of adding a second vent right at the crank case. You would simply need to add a "T" fitting at the turbo inlet to combine both vent paths. Here's a diagram for that approach:

The effects on the vehicle's tune are fairly minimal with these modifications. If the valve cover was previously routed to the turbo inlet pipe, then "metered air" (air that has been registered by the MAF sensor) was ingested through the PCV system into the intake manifold. When switching to the vented catch can as the source for the PCV flow, that air is now "unmetered" (meaning the MAF sensor hasn't registered the air and the ECU won't know to compensate for it). This may result in slightly higher fuel trims at idle and light load, and may require a slight increase in the idle / light load portion of the MAF curve. Your tuner should be able to make this adjustment without any issue, or you can do it yourself following the MAF calibration tutorial in Cobb's ATR Help File.