May 18 Posted by Super User in PCV Plate

Before diving in on this install, give this tech article a quick read to make sure you have a solid understanding of the principles behind this product.

Installations for this product will vary depending on the current state of your car's PCV setup.  Some cars may already be running a sealed catch can between the intake manifold and crank case, some may have the valve cover port vented to a VTA catch can, or a slash cut in the exhaust, or still connected to the turbo inlet pipe.  These slight differences will only affect the routing of various hoses, and this guide should still serve as a suitable how-to.  The car used in this guide has a stock PCV setup (e.g. no catch cans). 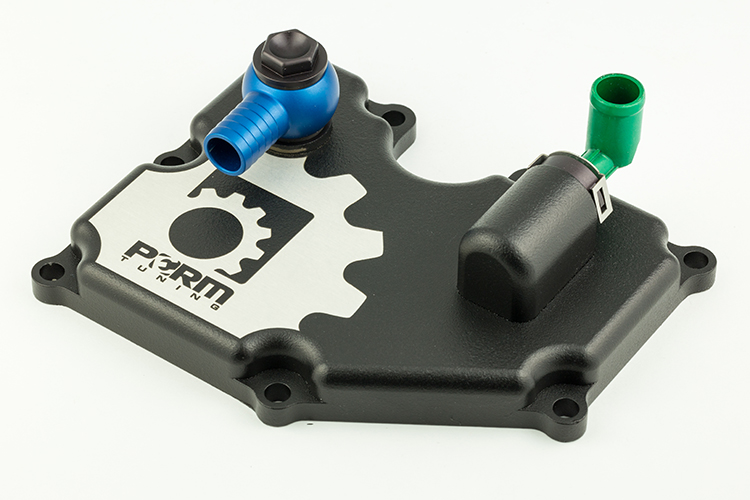 Go ahead and jack up your car and secure it on jack-stands, as you'll need to reach up under the intake manifold to swap out PVC plates.

NOTE: This install would be quite a bit easier with the intake manifold removed, so if you happen to have it off for some other reason (valve cleaning or injector seals), that would be a good opportunity to do the plate swap as well. 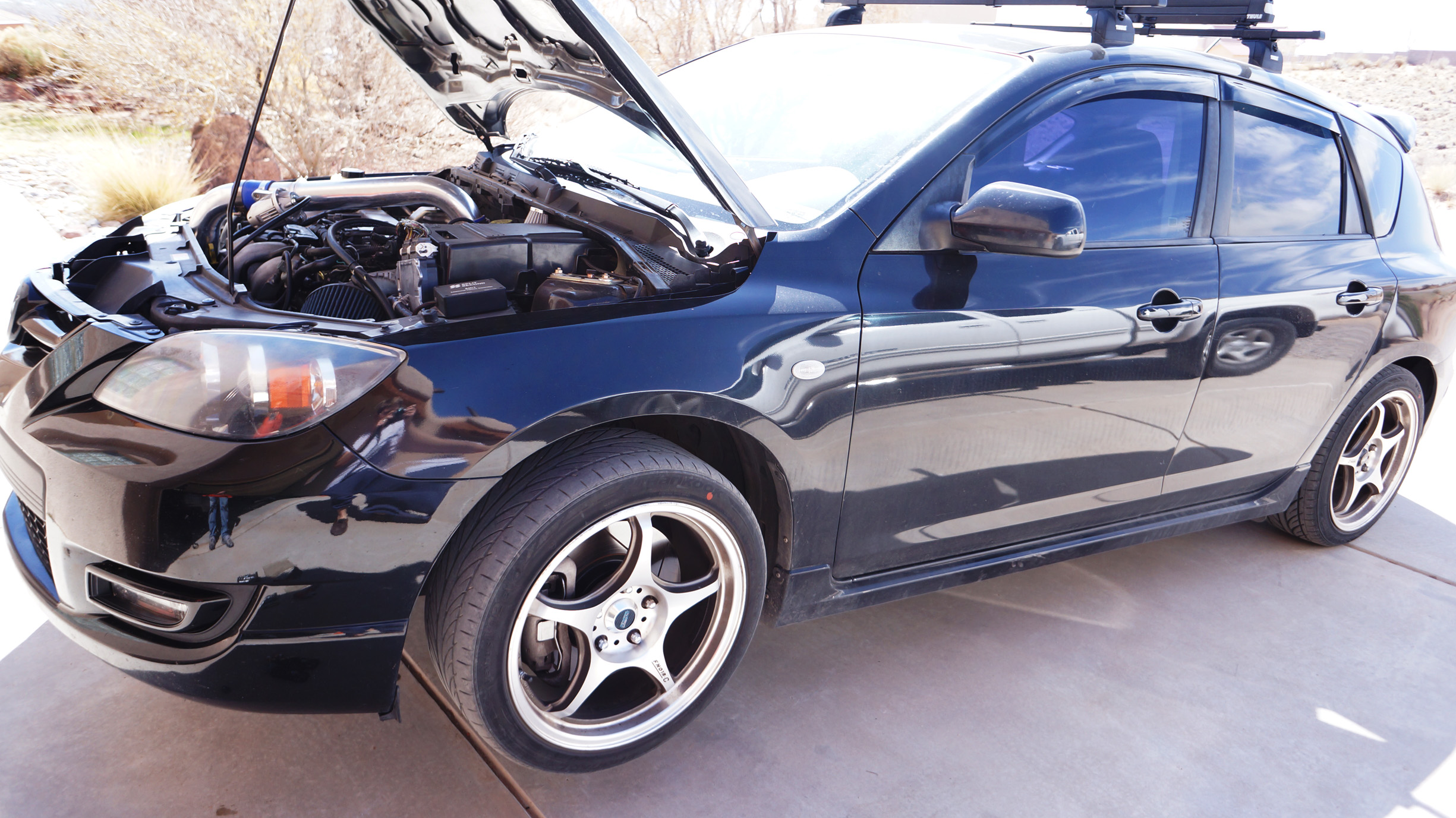 The PCV Plate we're changing out is under the intake manifold... way down there. 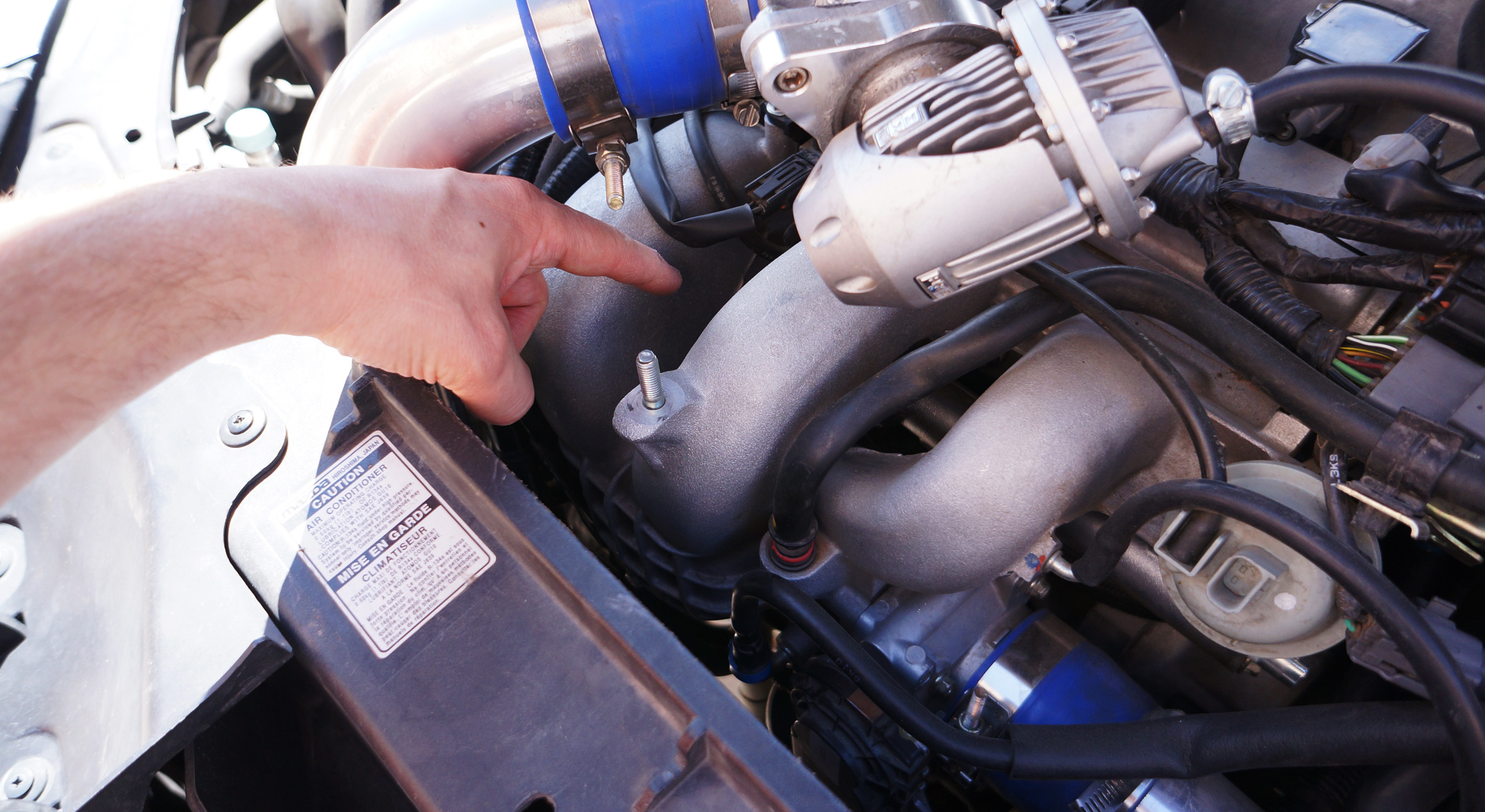 Here's a view from underneath. 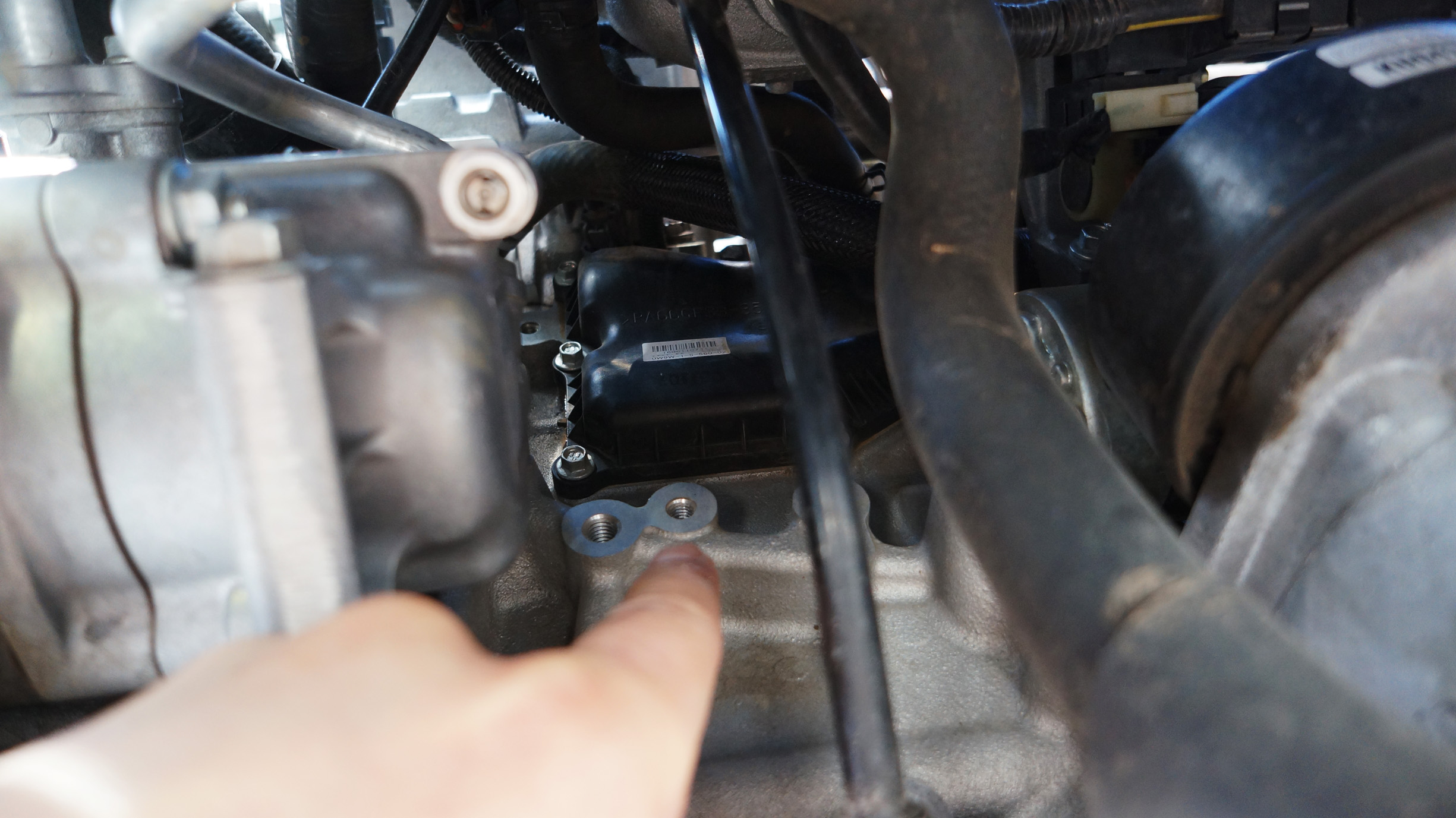 To get the OEM plate out, you'll need an 8mm socket, extensions and a pair of pliers to remove the oem hose clamps. 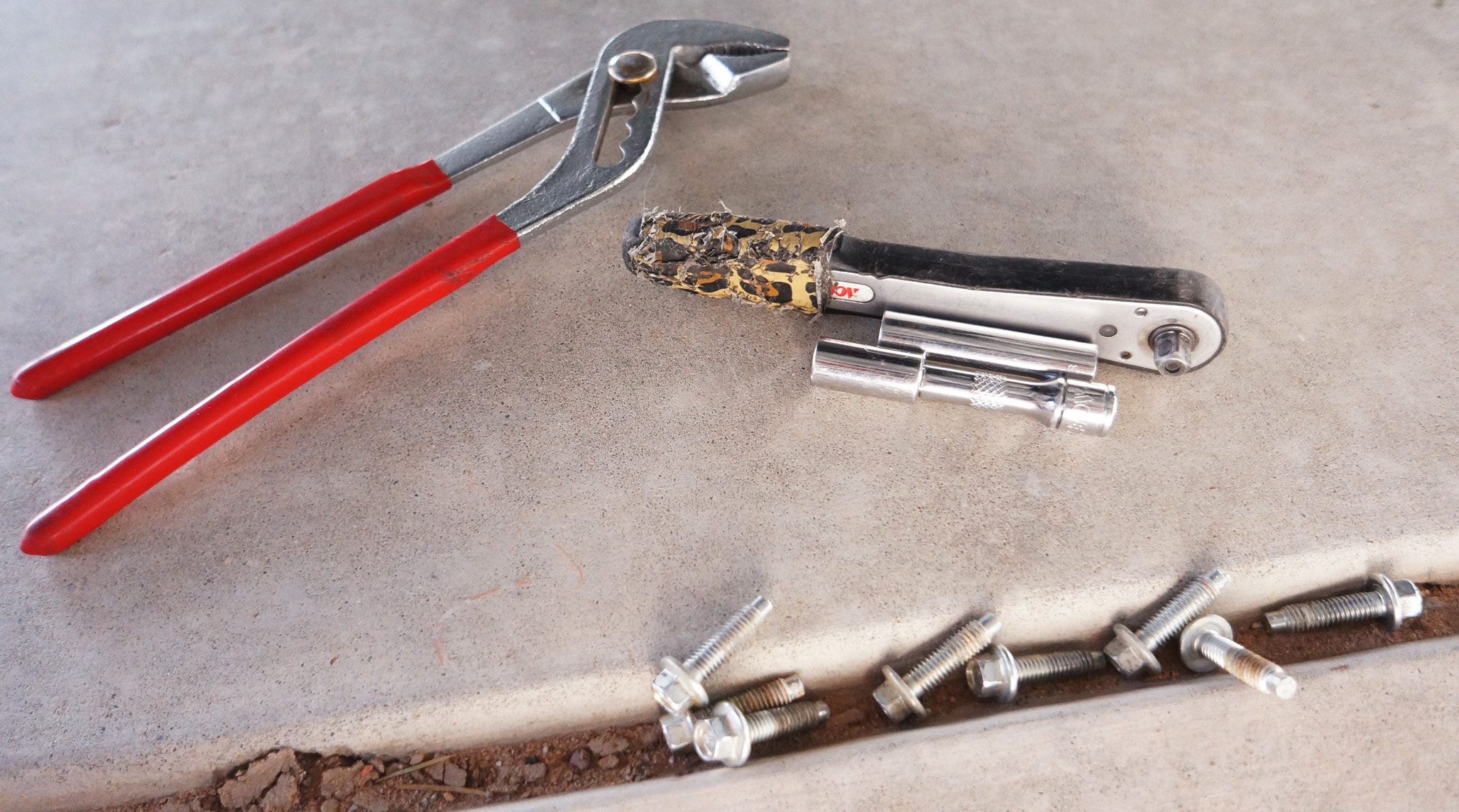 It's not easy.... but also not impossible.  First remove the OEM PCV hose clamp and hose from the intake manifold.  You can then push it out of the way to access the upper bolts on the stock plate. 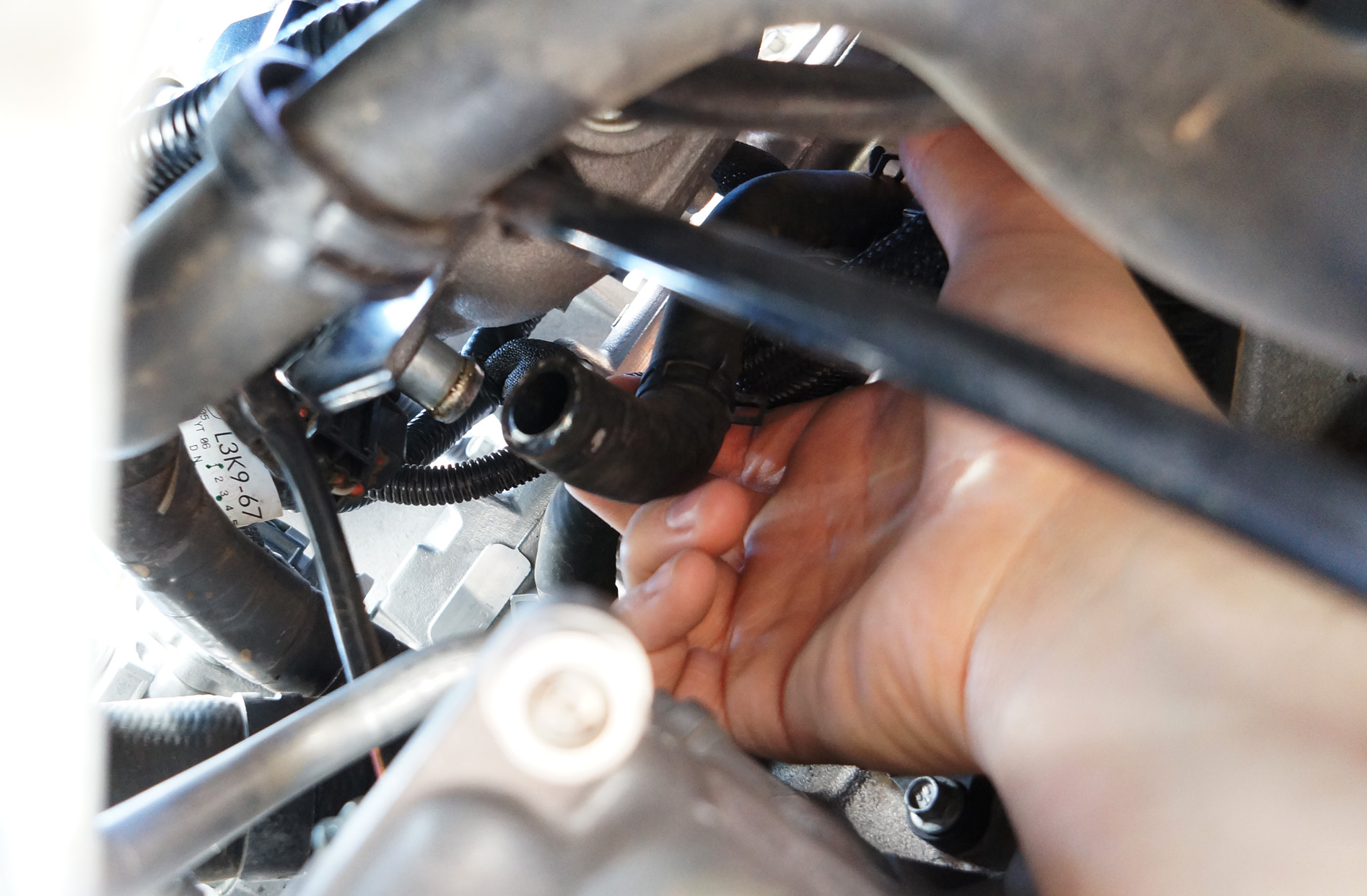 Be careful not to break the stock PCV valve, it's only plastic, and will break if you stress it too much.  You can remove the whole stock hose if you want at this point, or later once the plate is unbolted from the block.  Whichever is easier.  There are 8 bolts on the stock plate that need to be removed, and the locations are exactly the same as the new PERM plate, so you can use that for reference.  In order to shimmy the stock plate out from under the car, the stock PCV hose will need to be removed.  It's a tight fit with the dip stick tube, but don't force anything, it will come out once you get the right orientation. 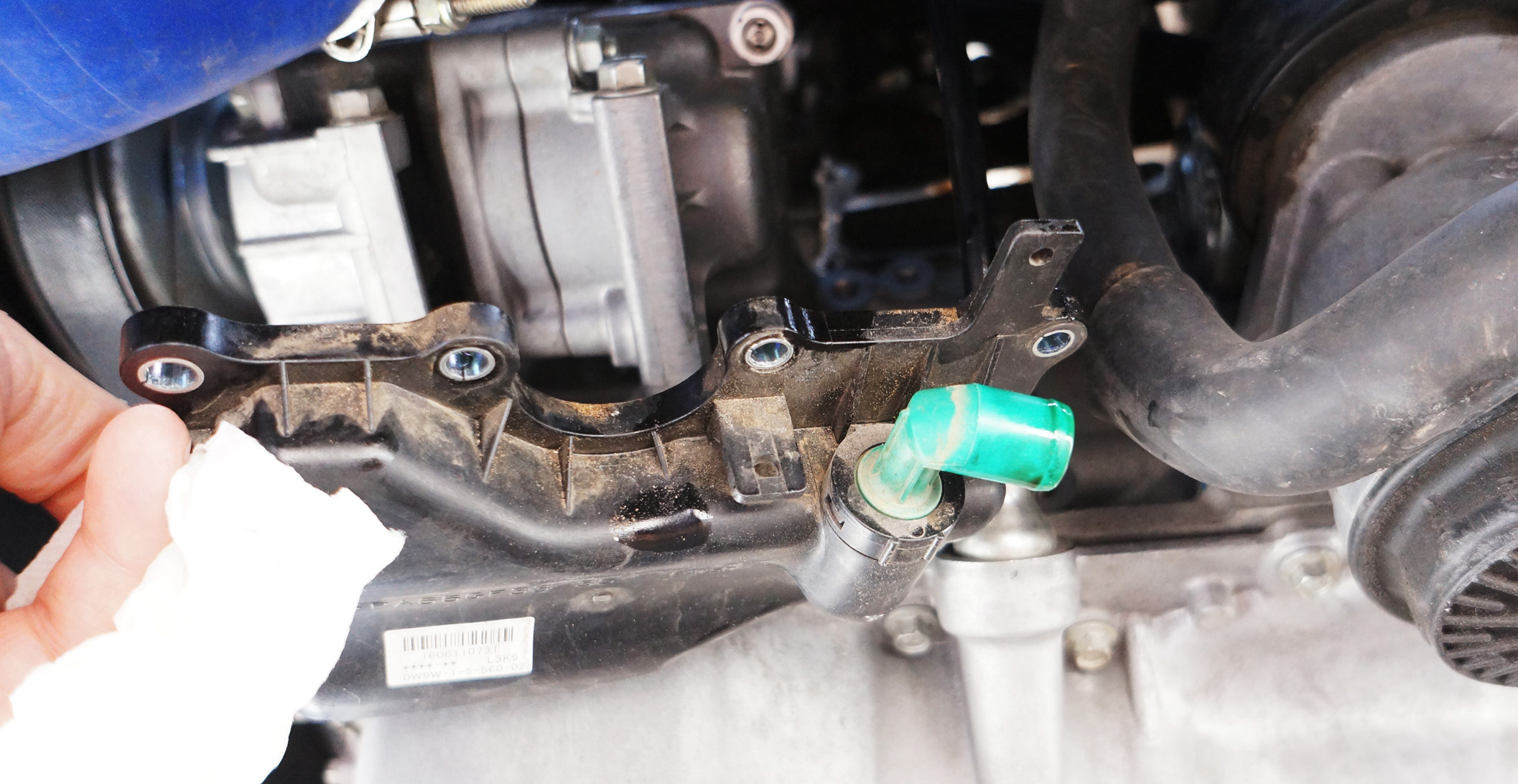 Now we need to get the stock PCV valve out of the stock plate, since we're going to install it into the new plate.  Using some needle nose pliers, or something similar, you can carefully squeeze the ring on the front and back (between the vertical rib marks), and rotate the ring to pop it over the retention tabs. 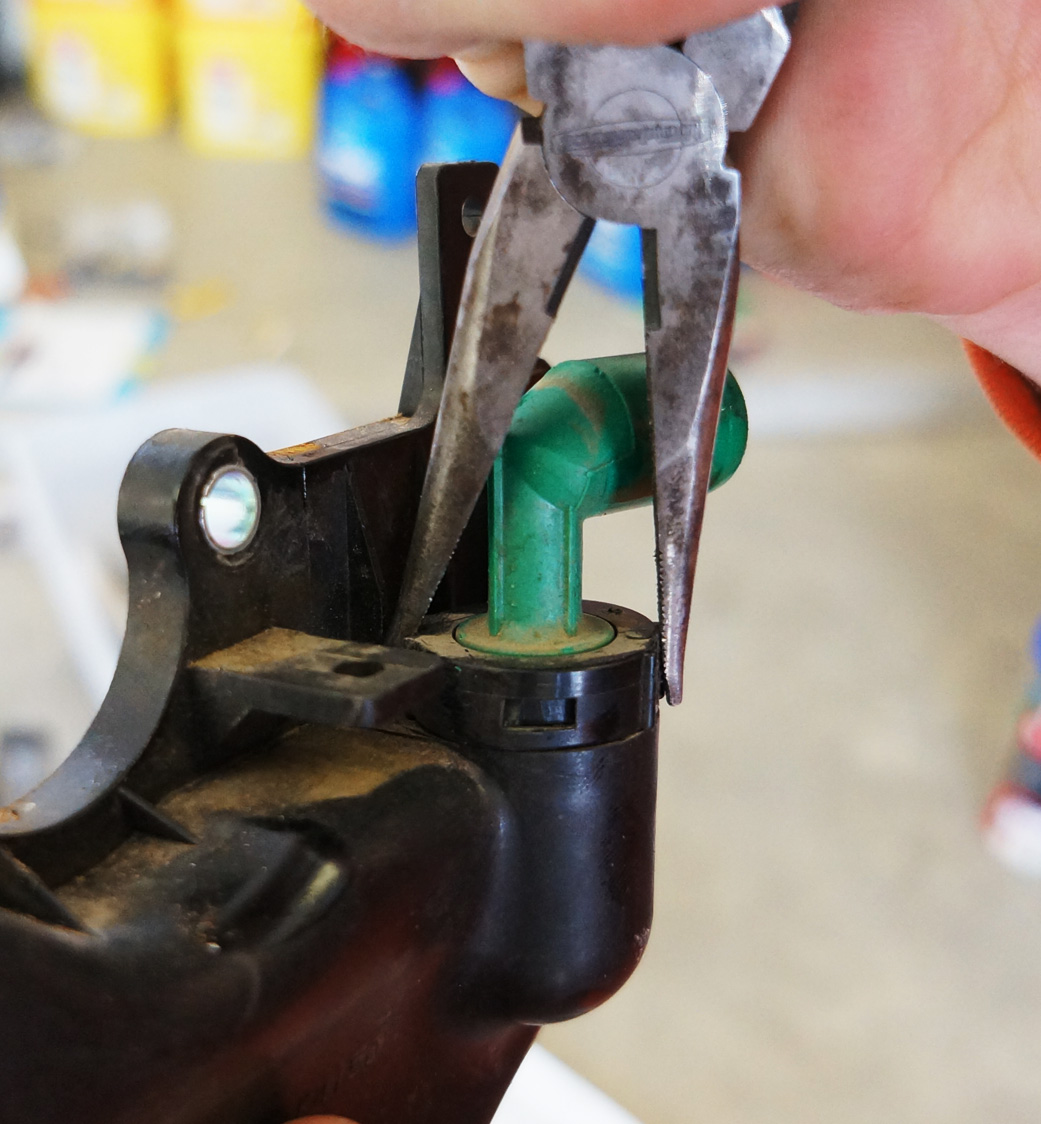 Once the ring has started to lift, you can carefully coerce it the rest of the way off with a flat blade screw driver.  If the ring is damaged, it's okay... A new retainer is provided with the new PCV Plate, and the OEM ring can be discarded. 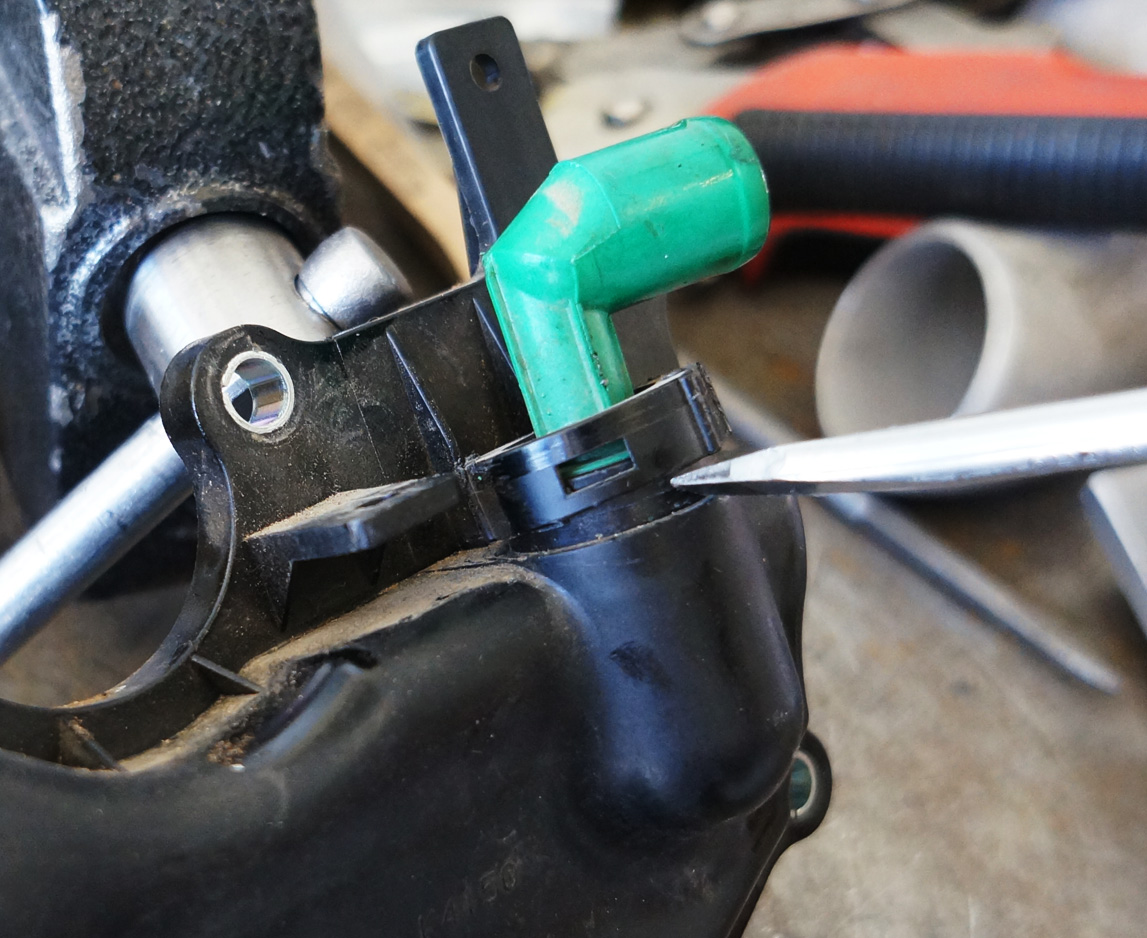 Here's the PCV valve freed from the stock plate. 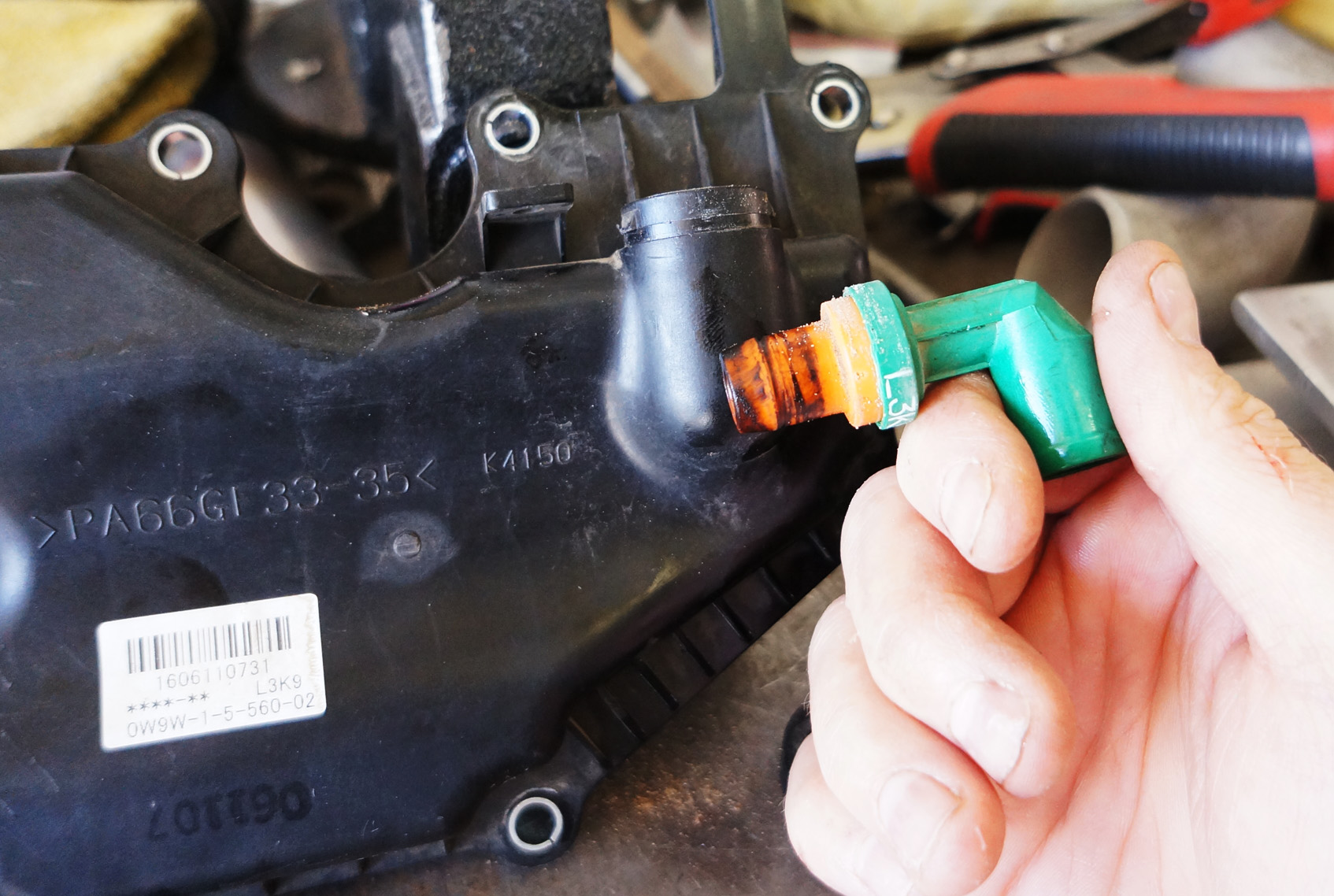 Clean the valve up with some carb cleaner or gasoline... Chances are it'll be pretty filthy.  Next we need to remove the stock plate o-ring gasket, since that will be reused on the new PERM Plate.  There's a small tab you can grab, and carefully peel it out. 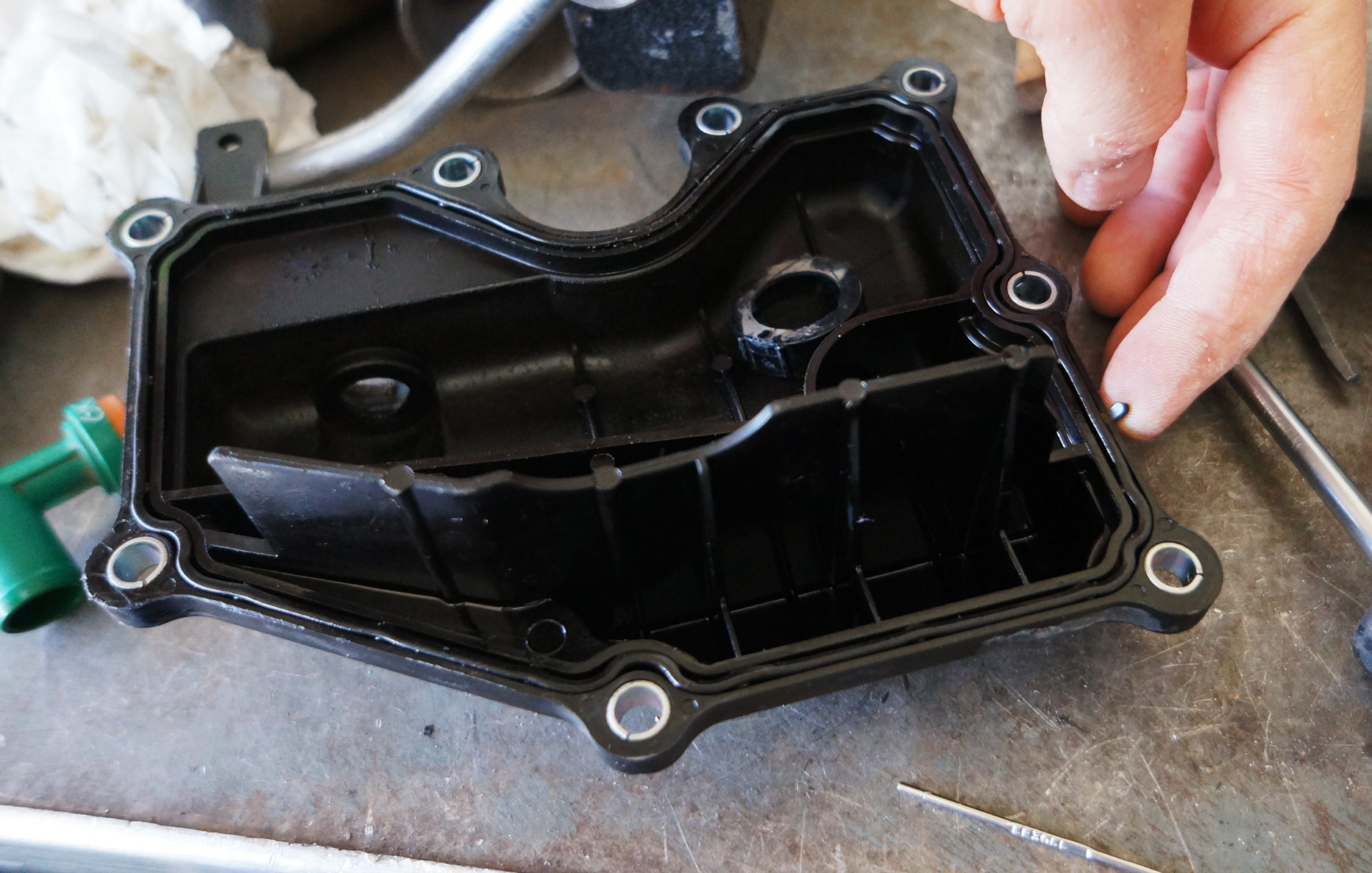 Now lets get the new PERM plate ready to install.  Go ahead and install and align the Banjo Bolt assembly in a direction that you think will work best.  You can adjust it a little bit more if necessary once the plate is installed on the car, so it doesn't have to be perfect, just close.

Assemble the Banjo Bolt with an o-ring on each side of the banjo nipple fitting. 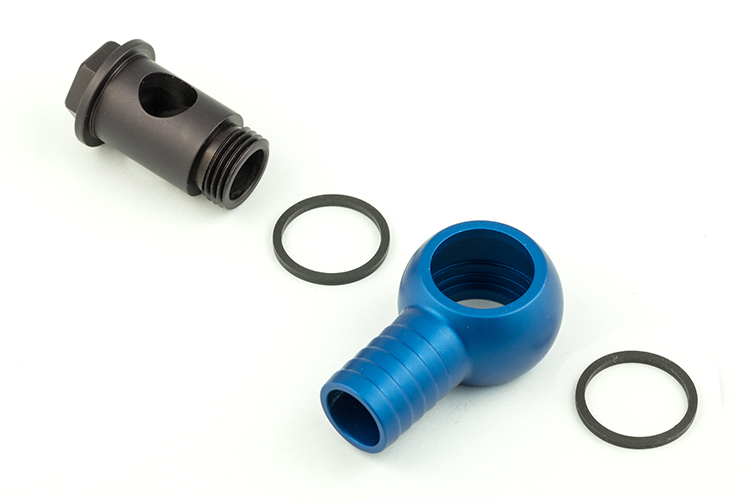 When threading the Banjo Bolt assembly into the PCV Plate, make sure the o-ring between the plate and the nipple fitting is flush!  There's a slight shoulder on the threaded bolt, and the o-ring needs to sit on top of in order to seal properly against the plate. 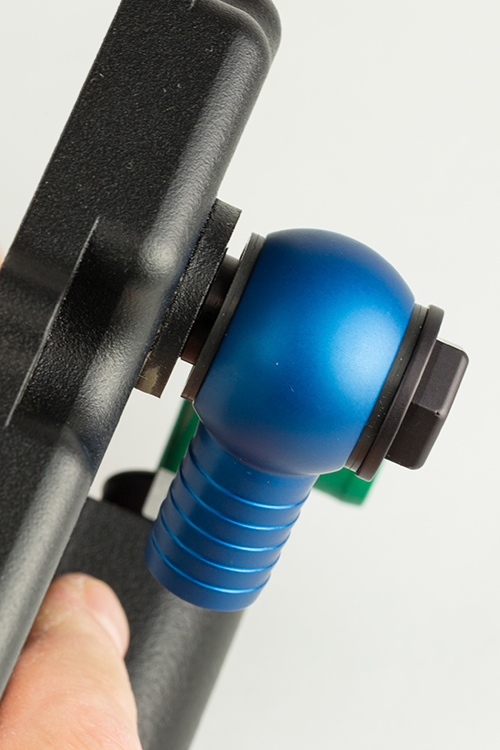 Next, we'll install the OEM PCV valve.  First, remove the small o-ring from the PCV valve, and insert it into the receptacle on the PCV Plate.  It should sit flush against the bottom-most groove in the receptacle. 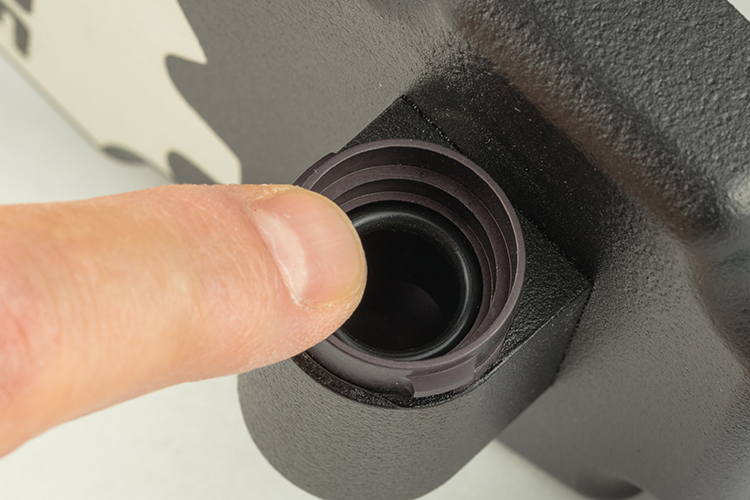 Once the o-ring is seated in the bottom-most groove, you can press the OEM PCV valve into the receptacle. 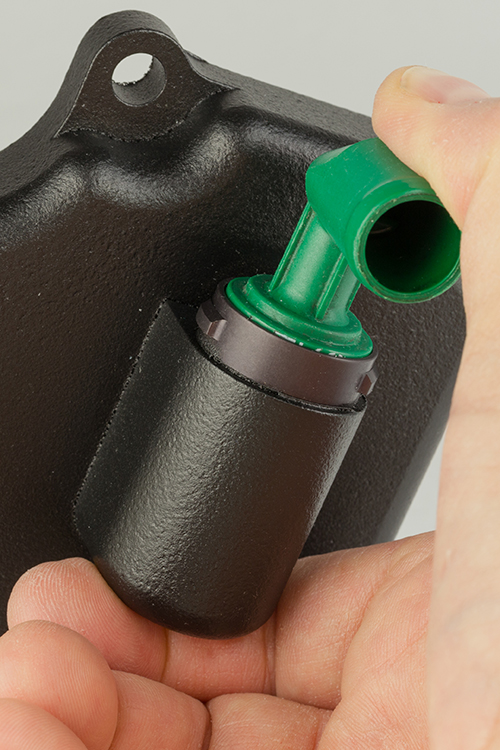 Lastly, you can secure it with the supplied retainer clip.  It's fine for the clip to be slightly loose, it will hold the valve in securely. 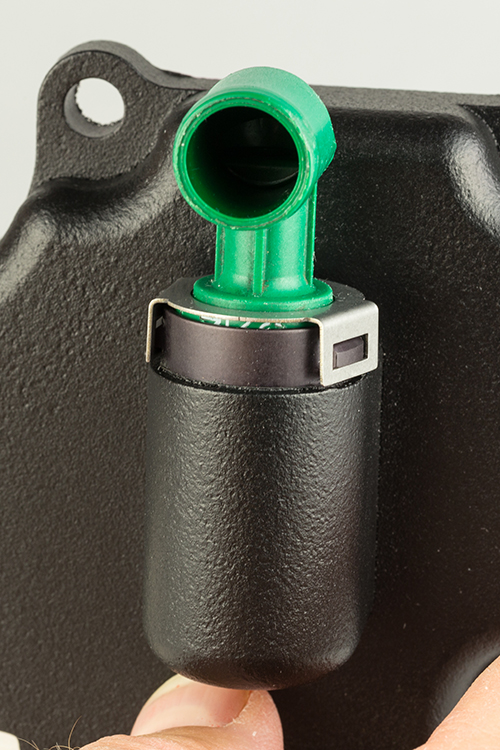 Next, install the OEM gasket into the new PERM Plate groove.  It's always a good idea to lube rubber gaskets with a little bit of motor oil first, that will keep them from drying out.  Align the gasket tab with the groove in the PCV Plate, and carefully work the gasket into the groove, moving away in both directions from the tab. 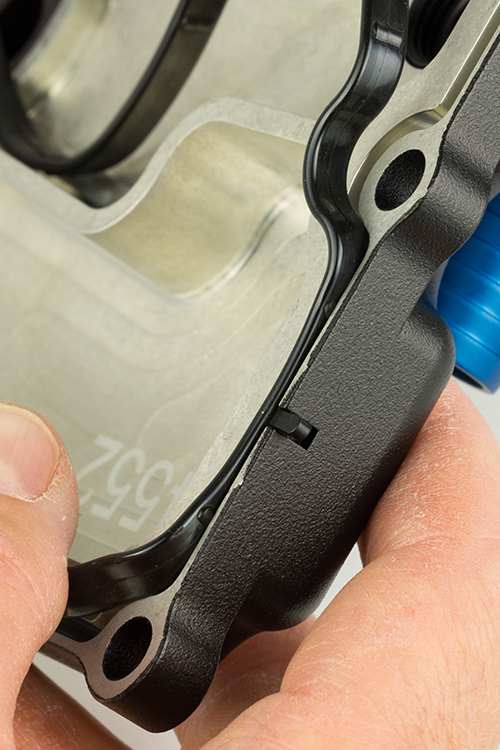 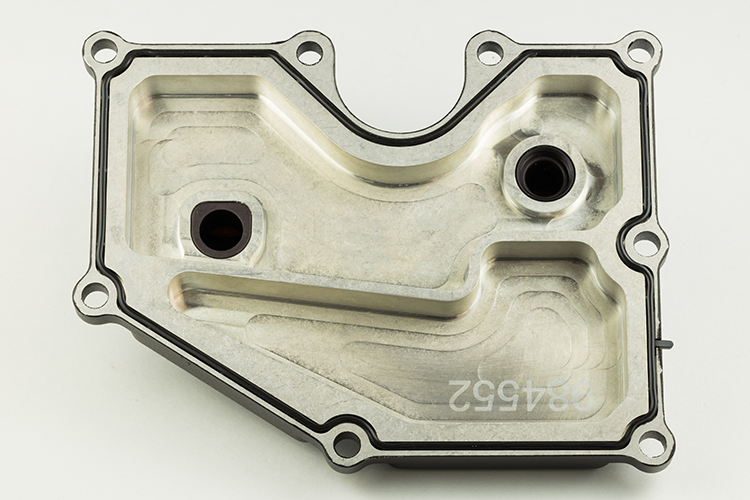 Wipe down the mating surface on the block to make sure it's clean, and install the new perm plate.  Start with the middle bolts and work your way outward, as you would with any component that uses a gasket.  The torque specification for these bolts is only 70-100 inch-lb... that's less than 10 ft-lbs.... so there's no need to over-torque them.  You can make any necessary adjustments to the fittings on the PERM Plate at this time. Once the Banjo Bolt is in a satisfactory postion, tighten it down to 10 ft-lbs.  Don't over-torque the Banjo Bolt either. 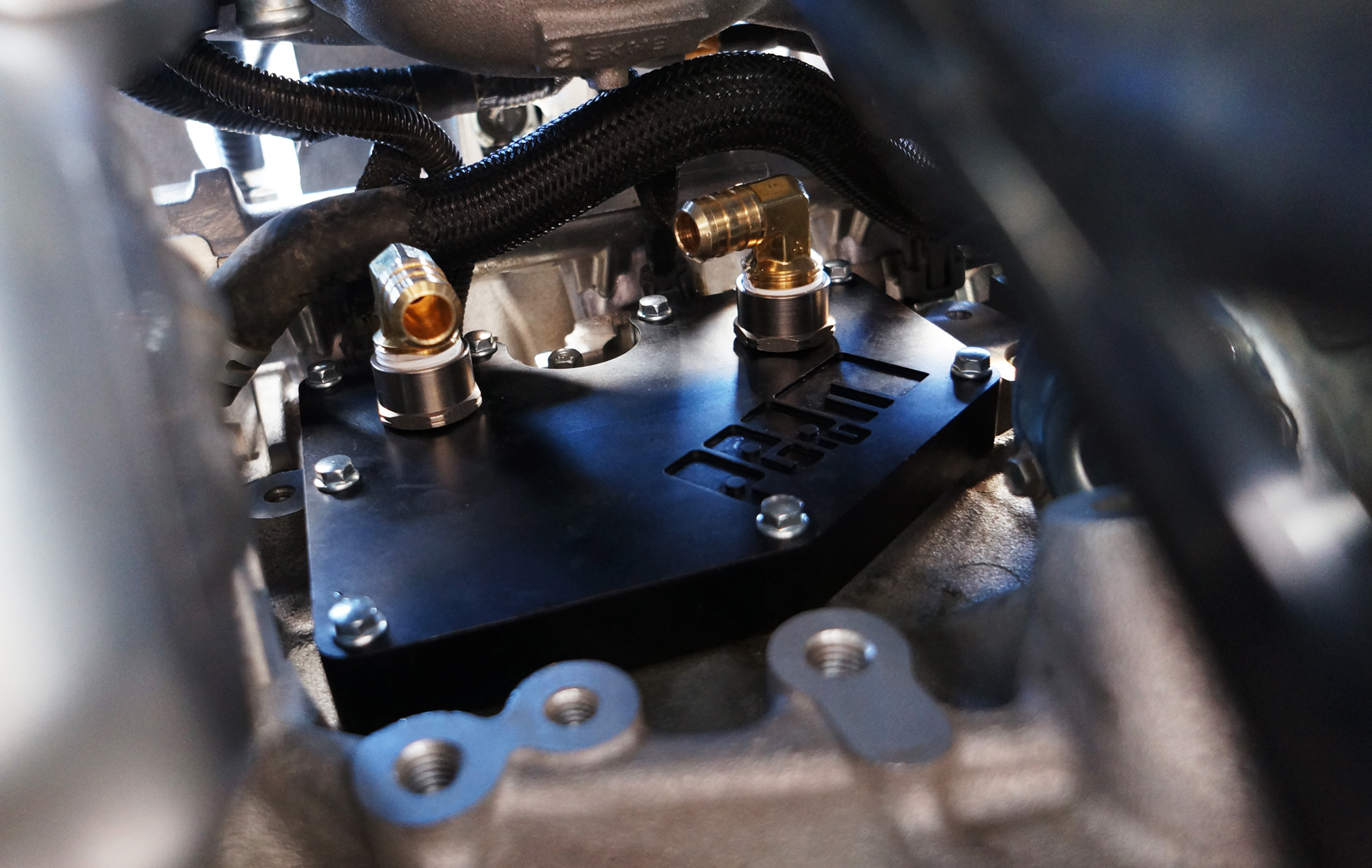 Next, attach the new hose that will be used as the second crank case vent to the Banjo Bolt fitting.

The new 5/8" check valve will go in-line with this hose.  ***IMPORTANT***  Make sure you have the correct orientation on the new check valve.  If you get it backwards, it will not vent crank case pressure but instead will defeat the stock crank case flow under vacuum conditions (see the tech article here if you don't understand this). 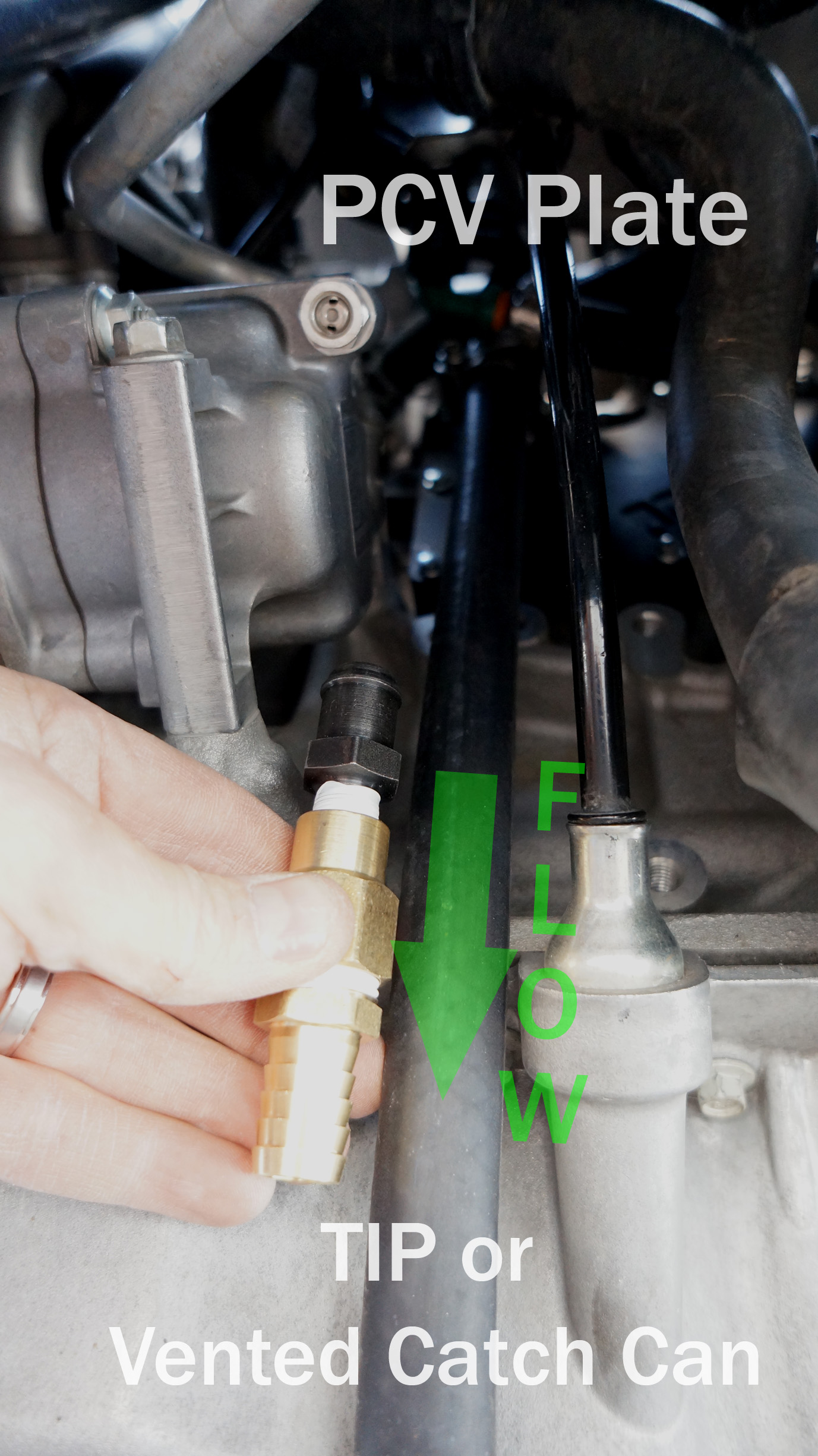 At this point, route the new line to your desired vent location (either 'T' it in with the stock valve cover port hose, or route it to a vented OCC).  Once routed, find a convenient spot to put the new check valve in-line with the hose, and voila... you're done.

Congratulations on a job well-done!  You can now go put band-aids on your hands and enjoy a nice cold beer.